Some of The Rust’s Best Artists Touch Down in Harrisburg This Month! 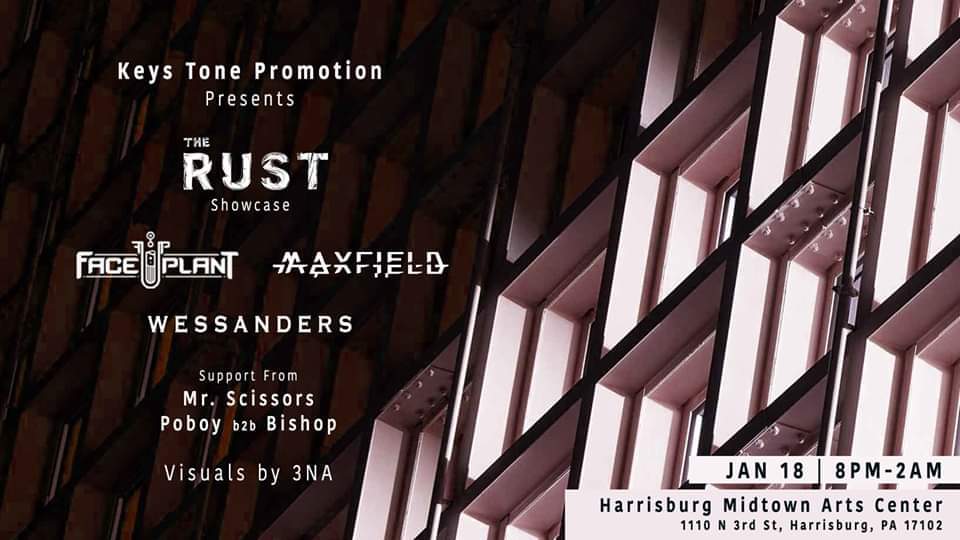 The Rust and Keys Tone Promotions are putting on a can’t-miss showcase in Harrisburg at the start of the new year. As with anything these guys do, we’re hyped beyond reason.

If one of your 2020 resolutions is to turn up to more fire tunes, you’ll want to be at the function this January 18th at the Harrisburg Midtown Art Center. There, you’ll be treated to a veritable onslaught of live music from a handful of The Rust’s MVPs.

Take a deep dive into the lineup below, where we offer a quick listen to each of the headlining acts.

Fresh off the release of the ever-enthralling “Decoherence” EP, Face Plant will undoubtedly bring an exuberant atmosphere for this upcoming live set. Tracks like “Wave Function” paint a portal open into outer worlds of genuine inspiration and emotion. The concepts his compositions plant in the subconscious feel as real as they are vivid, like a mirage you’re convinced you can reach out and touch.

Having shared stages with names like Ott, Jade Cicada, and CloZee, Face Plant is no stranger to crafting expressive ambiances through sonic exuberance and exceptionally crisp sound design.

Within Maxfield’s music, there’s a story to be heard; it’s told through the relationship of each note, measure, and phrase, placed with such subtle precision as to provoke the imagination.

You’ll rarely come across a distinct genre or trend in his tracks, but a creative melding of sounds from various influences that Maxfield wields to tell his own melodic tales.

Dive into his recent EP “The Familiar Taste of Poison” for a peek into what his live set will bring at The Rust Showcase on January 18.

When it comes to cutting-edge composition, Wessanders brings the ruckus with dynamic rhythm and raw sound. From track to track his compositions move fluidly between genres with such astute ability and design that fans of dubstep, glitch hop, or even house will get a kick from.

Wessanders adds a more personal touch with his own vocals as well, pushing his creative personality to rare and extraordinary places.

We’re recommending a listen to his “Up Here” EP for its out-of-the-box sound and structure. Our favorite track from this project is “Secure The Bag.” Part bass, part alternative, this track is truly a unique creature.

No show is truly complete without its supporting acts – they set the vibe and get the show rolling smoothly. And when it comes to setting the proper vibe, The Rust knows best. That’s why they’re bringing on Mr. Scissors and his pure-fuego flips, as well as a b2b from Bishop and Poboy.