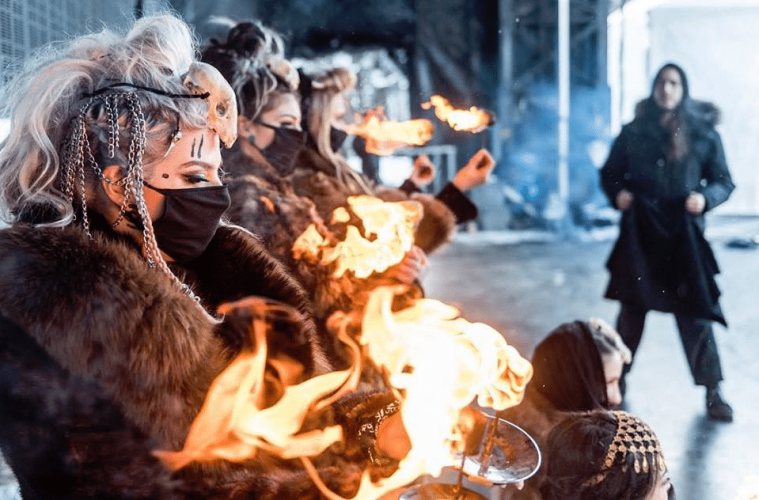 It’s insane how mesmerizing a hard-trained craft performed right before your eyes can be. Following their countless hours of practice expressed in the fluidity of their movements, the controlled caution hidden behind a calm face, and next-level precision executed effortlessly like second nature.

🔥🔥🔥🔥CHECK IT OUT!🔥🔥🔥🔥We are so proud to finally present: 🔥🔥🔥The Hive🔥🔥🔥Featuring: Nora Kay and Victoria ElizabethAs we embark on our first international tour this Summer 2017. Come watch us wield the elements at the following events:Members Only Campout, New YorkPEX, Philadelphia Valhalla Sound Circus, CanadaFarmfest, New Jersey Shambhala, Canada Burning Man, Nevada And many more….We are brave, enigmatic, we light the night on fire💋💨🔥✨••••••••••••••••••••••••••••••••••••••••••Absolutely none of this could have been possible without the help of our community and sacred friendships. Including:Derek Means (@drmeans & http://www.derekmeans.com/) for donating his time and energy into making this amazing project come to life. Without his skills as a film maker we wouldn't have been able to create such a piece. A super special thanks to iX for laying down this super sexy exclusive track for us to move to.The Floasis for providing a safe space for all spinners and inspiring creativity. Layla Wrencher for supporting our journey and gracing us with her gifts for the shoot. Jamie Sloan (@_bonedage) for the epic bone harnesses you see featured here. Sam Drake for adorning us with their sexy leather work. Special shoutout to our powerful fire sword maker Improper!We are excited to welcome Mark Saxon to the team! As well as thank him for his dutiful efforts in keeping us safe. And a special shoutout to a leader in his craft, Shade Flamewater for the kickass hollow torches.Enjoy!

That’s what’s so cool about The Hive, a badass group of woman fire-breathers (in-fact the world’s FIRST all-female fire-breathing collective) doing what they love, doing it right, and empowering their peers to do the same. The FDNY certified performers have made their rounds to events and festivals worldwide on a mission to support and inspire fellow females, unabashedly express their sexuality, and develop a community of women who seek the same. Their philosophy is fierce, and only their strong-minded co-founder Victoria Zajac and her fire-breathing assistant producer Felix Morrison can do it the proper justice. 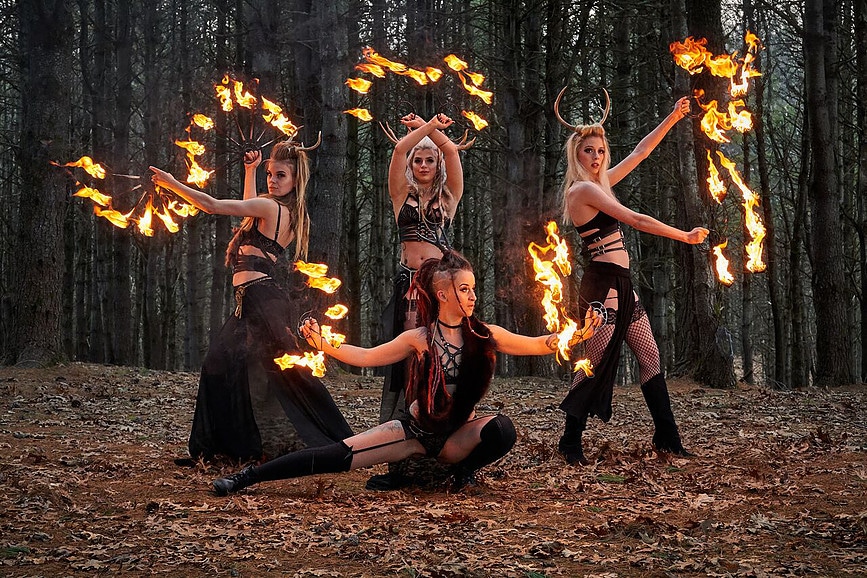 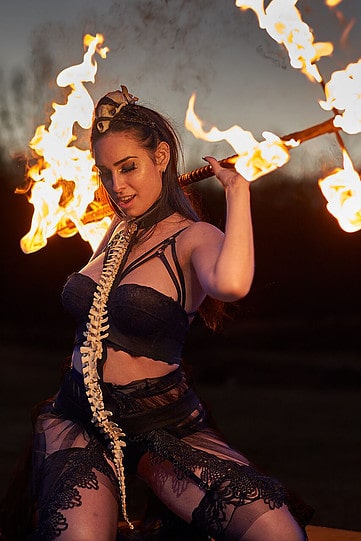 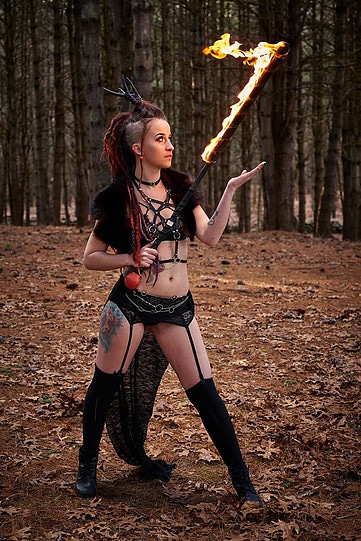 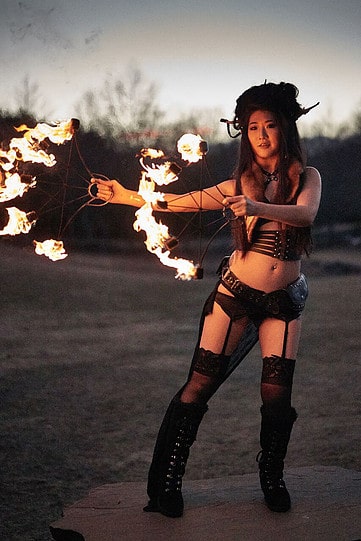 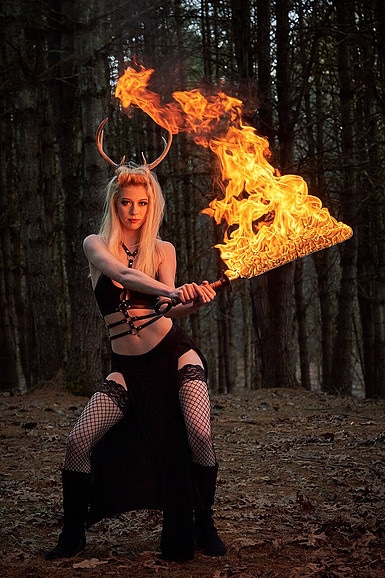 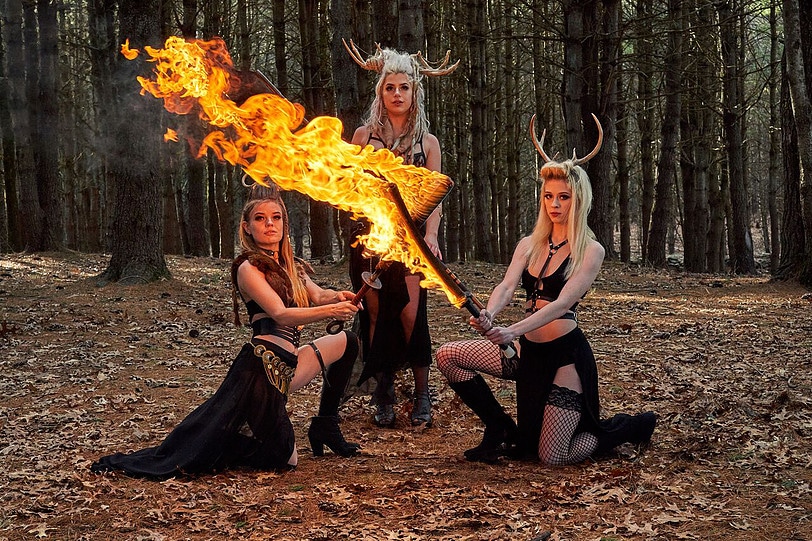 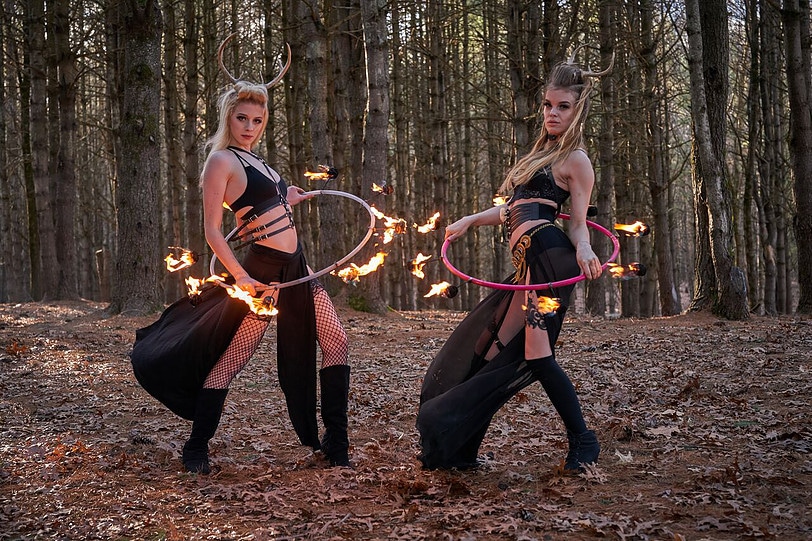 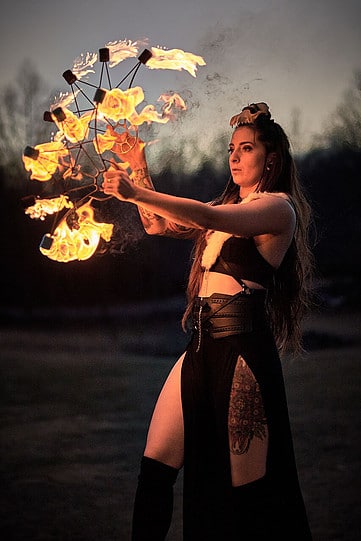 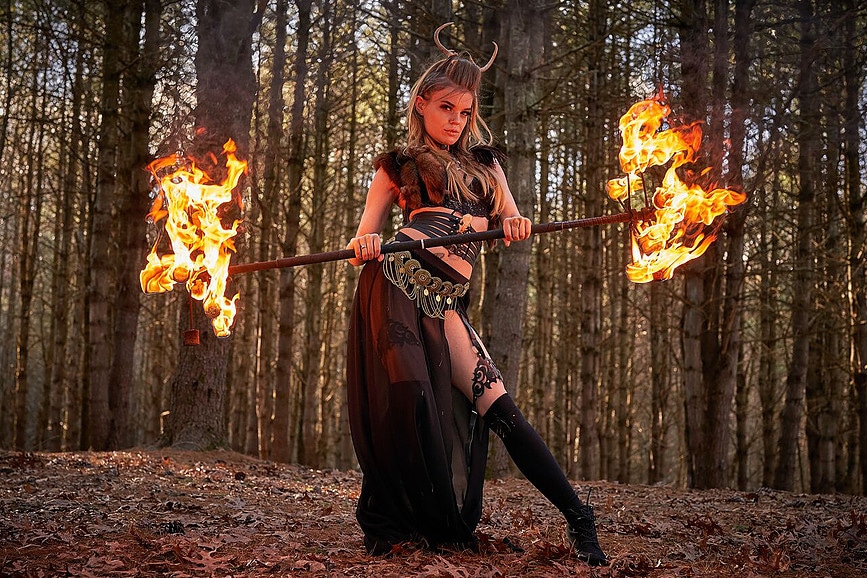 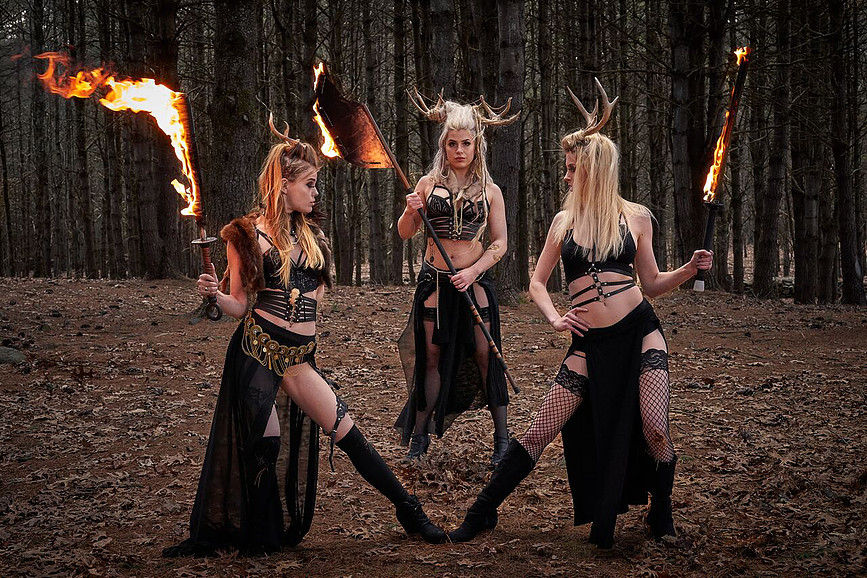 When did you start performing with fire, and how did that lead to establishing The Hive?

VZ: I’ve been fire performing for about 6 years now. The Hive was started by me and co-founder, Nora Kay, basically to provide a platform to empower and give a space for women to express their sexuality by their own terms and with the backing of an element that is so brilliant and powerful like fire.

We really wanted to inspire women to be able to push off their own fear and harness the parts of them that we all know exist within them, and inspire them to do that every day, via fire performing or just doing something that make you anxious or afraid, identifying where that comes from and moving through it. Every woman and every female-identifying human, and all human beings really, are capable of so much more than they allow themselves to be.

VZ: Well I had really bad anxiety as a child and in my early twenties to the point where I couldn’t even do anything alone. I couldn’t travel, I couldn’t take the bus I had a hard time going to classes. I didn’t really get rid of that anxiety or find coping mechanisms for that anxiety until I found fire and movement. And if I could do that, if I could find a way to push past all of that self-doubt and all that anxiety, it’s true and apparent to me that anybody can.

How does the name “The Hive” fall in line with the goals and ideals of your collective?

VZ: The Hive name came from a speech at our first gig before The Hive was even established. We were actually going to be “Wick Appetite.” And then the woman whose birthday party we were at ended up giving a speech about the decadence and the femininity and the opulence of honey, and how bees as a community and hives operate with a queen and a female leader.

It’s kind of funny because we picked that name because it sounds great, and honey was a really easy metaphor for fire. It was two of us and then we brought on Felix, and after that we expanded to about a 10-person team, and now it’s actually a hive and a hub of creativity where all these women are able to express themselves.

We’re all over the country and all over Canada, so we send our bees and our fire dragon babes to different parts of the world to perform the acts that we’ve all constructed and worked on, then we all meet together and come back together as The Hive!

Being an all-female collective, what do you want to show the world, or even yourselves, through your performances?

VZ: So much. We just want to be able to take back our own sexuality and take back our own power in a way that lets other women know that, no matter what end of the spectrum your sexuality and your femininity lies on, it’s all okay. To let people know that there’s a beautiful dichotomy that can exist between sexualities, femininity, and power, and we just want to blow minds and inspire women to represent themselves the way that they want to represent themselves without any fear or shame, and let them know that they can take up space in the world without having to shrink themselves. In fact, they should be getting bigger and louder and more combustible and explosive because now is the time to push those boundaries and push societal boundaries, and to let people know that the time for women is now.

Tell me about this upcoming Fire and Movement Retreat in October.

It’s on a beautiful art farm in Upstate New York from October 5 to the 7, we’re going to have all badass workshop leaders, all-female line up, all-female ran down to the Porta Potties (we’re using a female company for them!).

Basically, we want to be able to bring women together to meet each other in a non-competitive environment. Performing can be really competitive; fire in particular tends to bring out a lot of egos sometimes. And we just want to create a safe space that allows women to be just exactly who they are and be who they want to be in an environment that fosters learning and creativity.

Do you feel creativity flourishes a little better when there’s a little less tension and competition involved?

VZ: Absolutely. One of our biggest platforms is that were not a competitive company. We work with the community to find out what peoples’ rates are, we never undercut, and we’re always paid. We never take free gigs, which enables the community to value themselves more. If people want to take free gigs that’s their choice but we’re never going to take food out of a performers mouths because we want to be on stage.

We want to foster the community, and we want to build it up. And obviously we put a lot of ourselves into this, and when we’re valued and respected we’re more able to create and be weird and avant garde.

FM: If you create a safe space where someone feels they can be whatever they are, show whatever wounds or whatever delicate sides inside of them without judgement or competition or anything on stage, they can really tap into those and create really big, beautiful, brave things. 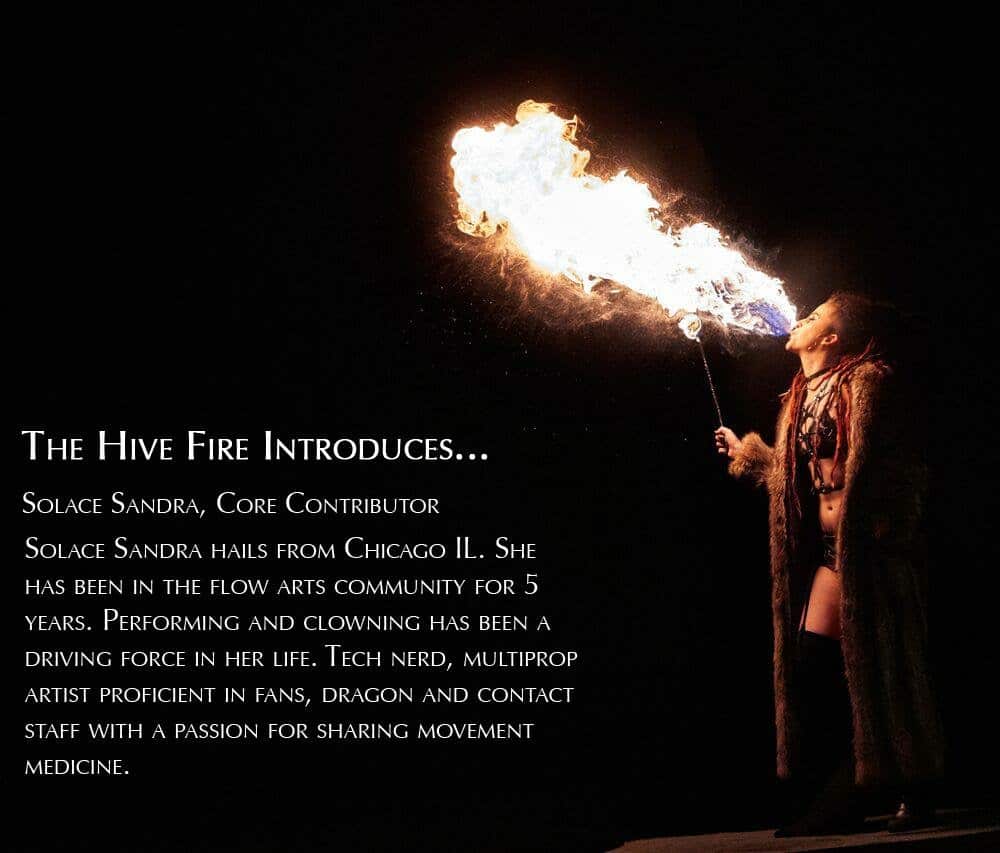 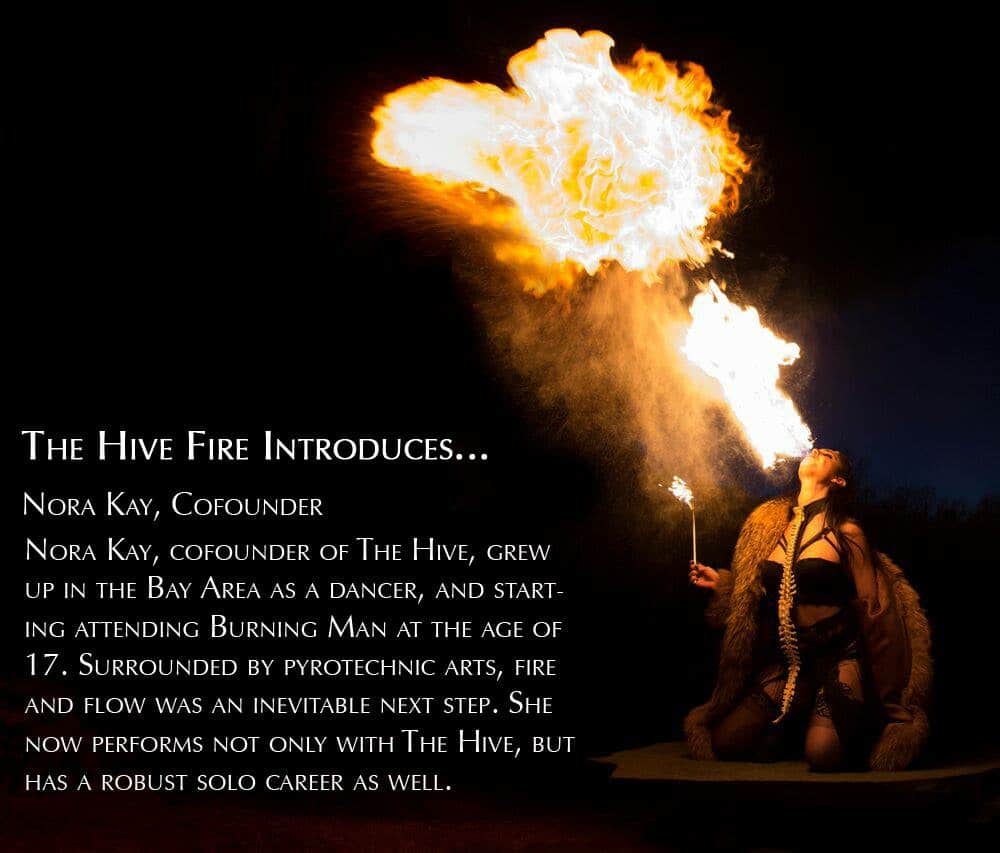 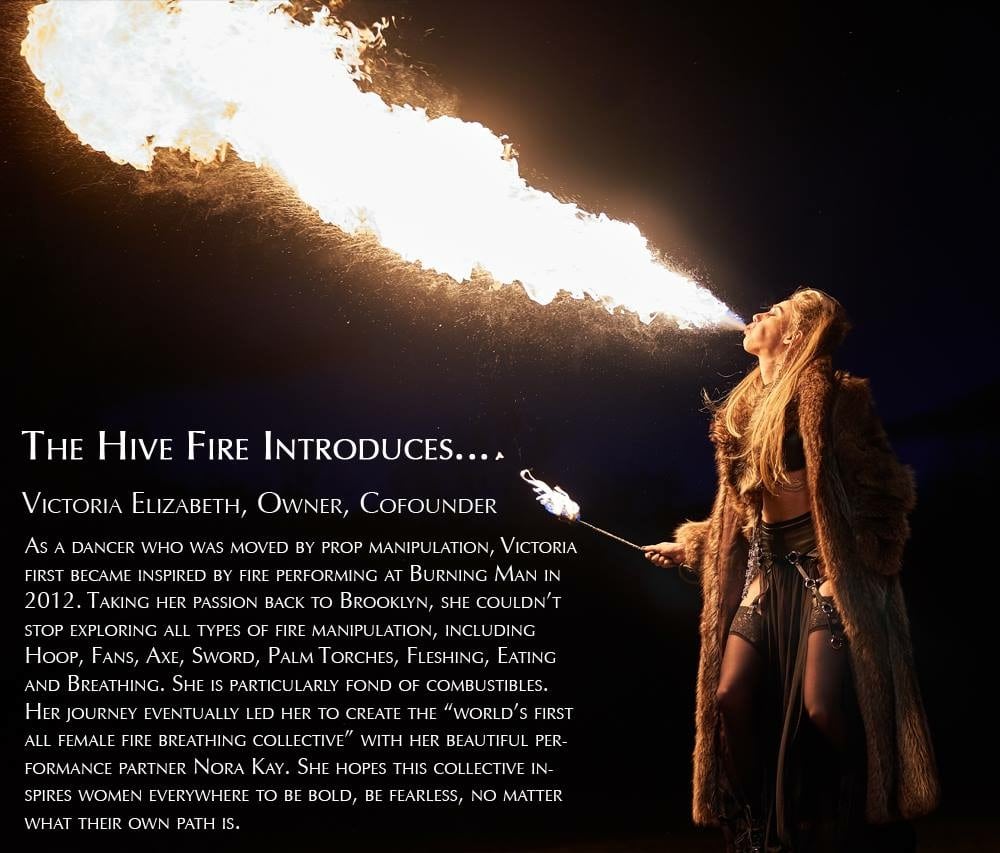 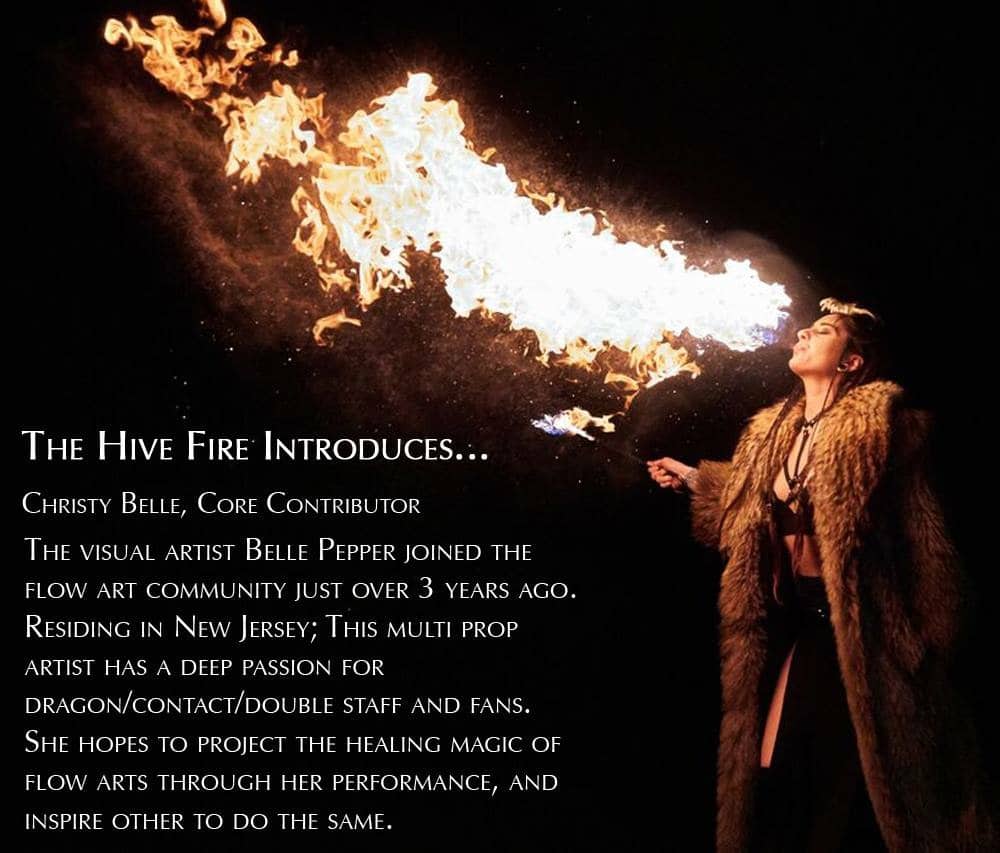 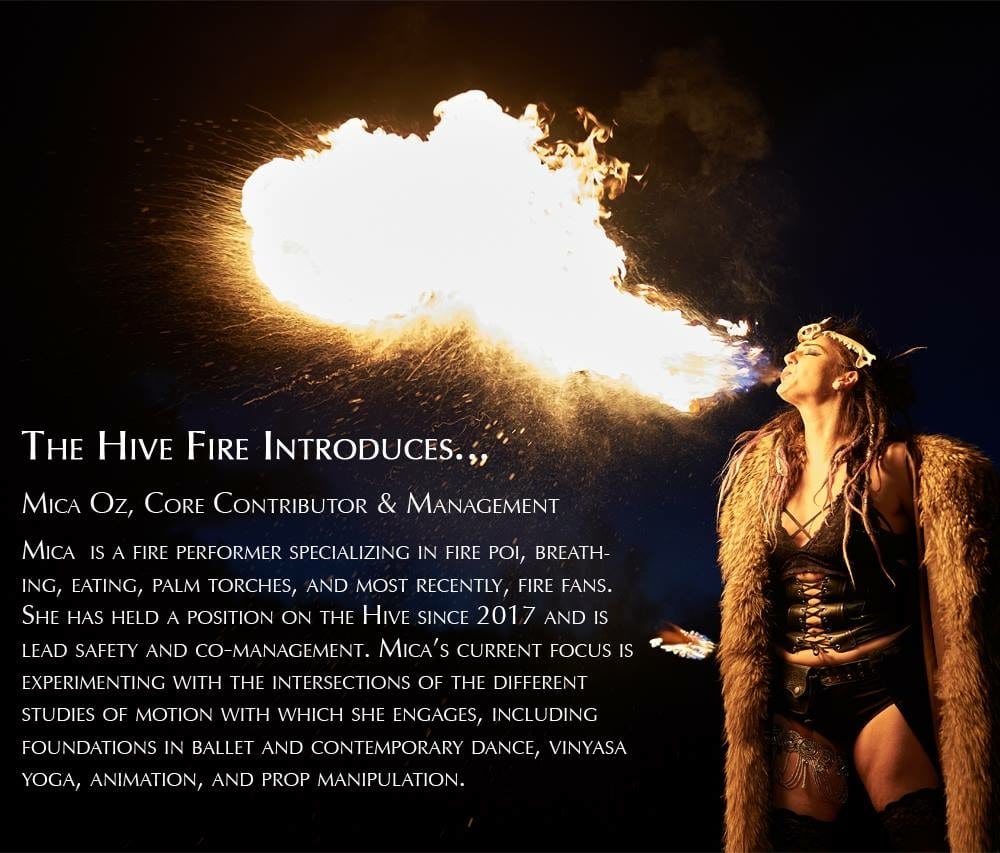 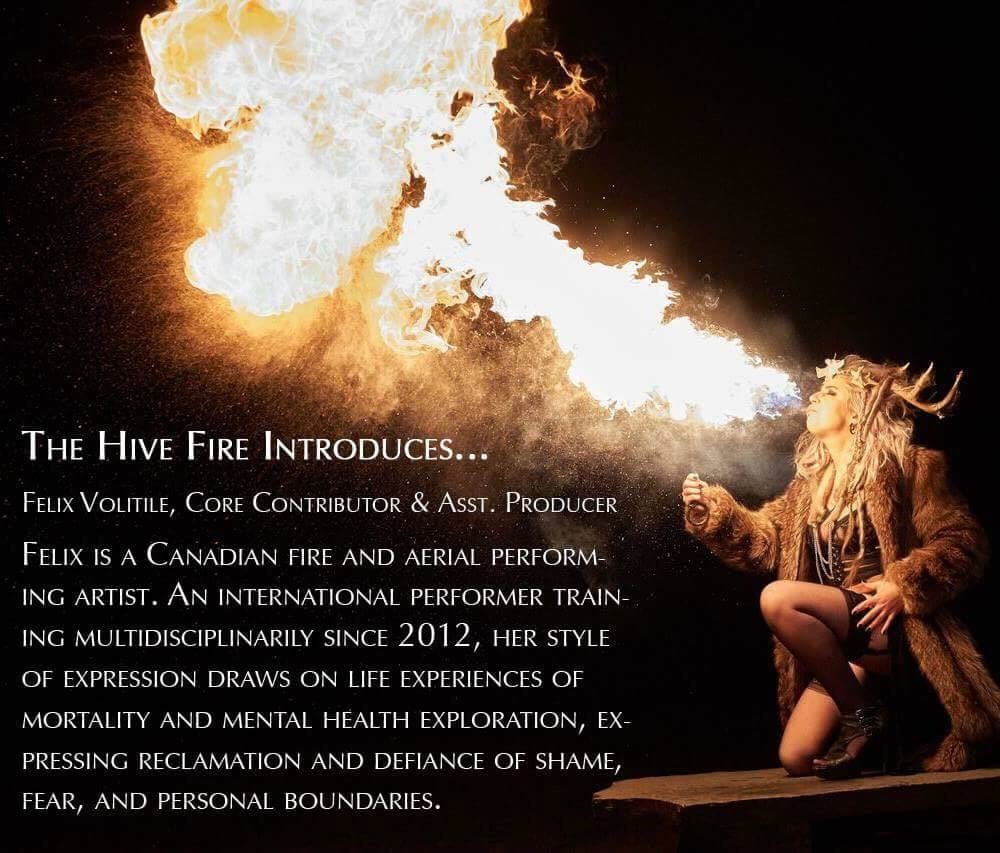 What is it about fire, conceptually, visually, or physically, that you think is so alluring?

VZ: The fact that it’s something that human beings have been programmed to fear evolutionarily and psychologically and since the beginning of creation. There’s no feeling like being able to manipulate it, tap into it, harness it, and respect it.

FM: It’s a symbol and a feeling of fear and power. So many of us are tied by stories of reclamation in a physical, emotional, or sexual way and we convey that journey and the pain that we’ve gone through harnessing this powerful element.

When you breathe fire it’s so loud, it’s so hot, its’ so bright, and you’re controlling it and you’re breathing out from your own living body into the world in front of you and it’s a very powerful way to convey a story in a visual, emotive, and connectible way for other people to feel cathartically and to go through that journey with you.

Are there any upcoming performances your project that you guys are very excited about?

VZ: We’re about what about to collaborate with a bunch of heavy-hitting female producers from Brooklyn and LA, as well as travel the world but that’s about all we could say right now.

What about any favorite past performances?

VZ: We’ve had a bunch of really fun performances. It’s kind of hard to pick because they’re all so beautiful and different. But, I think one of our favorite performances recently was at Valhalla Sound Circus, there’s a recap video with us all standing in line as the bass is dropping. The finale is lighting my sword and the sword just erupts in flames as the beat drops, and we’re just like on a stage in front of 3000 people just being powerful and the timing was perfect and the feeling and the energy and the receptivity of the crowd was so perfect.

What would you say to somebody who is hesitant about getting into fire performing, but really wants to?

FM: That it’s something that’s truly powerful and, by its very nature, dangerous. That’s so much of its appeal and because of its capacity for change, healing, and power, you’re right to have fear around it. It’s so, so important to follow the proper channels to seek out teachers with a good reputation and proper experience who follow the proper protocols.

VZ: Never teach yourself alone, there’s a network of fire performers that are also instructors. It’s very important to know that not all fire performers are able to instruct. I have told my team time and time again: no one is allowed to instruct fire with the exception of Felix, who has been eating for about 6 years. But there are people who are amazing instructors that you can always reach out to. There’s a Facebook group, Fire Breathers and Eaters, just a quick google search can show you who your fire instructors are in the area.

Not gonna lie, you both have some extremely well-thought out answers in terms of your personal philosophies.

FM: It’s because we’re speaking about something that has such deep meaning to us personally and transformatively. It’s our art and it’s out story of what we’ve fought through, we have so many truths to tell through it and that it follows naturally that we have a lot of truths to tell about it.

VZ: This is our fucking life! We’re not hobbyists, we don’t do this as a side gig. We have dropped everything, and almost every single member of my team has dropped everything at one point to give to the fire community to give fire to The Hive and to lend themselves to our vision and our brand and our purpose. And when you see that kind of commitment and dedication, the truth is apparent.

FM: We keep each other inspired by that, too. It’s so important that they’re not just coworkers, we are family. We all take genuine care of each other as people, as well as keep the inspiration going. We continue to be daring and trust each other and we love each other, and we put our lives in each other’s hands every time we go on stage and that foundation of trust is paramount to what we do. ◆